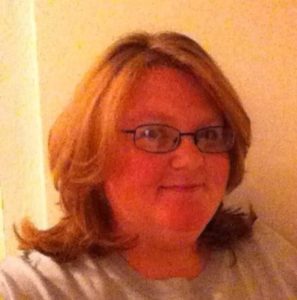 Denise Samuels has been a member of RCLT since 2012, either helping in the lobby or acting on stage. Her most recent role was Miss Stephanie in To Kill A Mockingbird. She has enjoyed getting to be a part of this play with her husband and friends.

Thanks for taking time to speak with us today. Tells us about your character, Madge Larabee.

Denise: There is more to Madge than is first seen. She is definitely not your “warm and fuzzy” type. She is very cold and determined. I think it’s due in part at least to a sad childhood. I mean, anyone who tells their own child that they aren’t worth a bucket of spit, well that’s just horrible parenting! So Madge has developed that same hard edge herself. She is extremely frustrated with her bumbling brother and really wishes he would just let her settle things her own way. She would never let some stupid emotion get in the way of what needs to be done.

What are some of the challenges you have faced in portraying this character?

Denise: It’s been fun playing someone so different from myself, but I’ve had to work on my facial expressions. Madge is bitter and angry all the time. I never get to smile as her, the closest I get is a smirk, and I’ve had to remind myself to keep that scowl on my face and stay in that frame of mind.

What do you hope audiences will take away from this production?

Denise: I hope the audience enjoys the story, it’s a great one with some twist and turns. I love the theatre because you can really get pulled into the story. With movies you can sometimes zone out to an image on a screen, but theatre is real live people performing right in front of you, and it’s enchanting. I hope people enjoy our interpretation of Sherlock Holmes because its been a blast to bring to life!