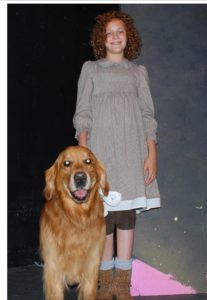 In your opinion, what do you think Annie can teach young girls today?

Samantha: I hope they can learn a good lesson from Annie. She is always optimistic through out the play, no matter what the circumstance. She is a good role model for anyone when life gets tough.

What have you learned from performing in this play?

Samantha: The hardest part for me was figuring out how I was going to play Annie. Her character was complex and I thought I had it all figured out. The directors wanted me to play her more like a little girl. I was like, “What, I am a little girl,” and Annie is supposed to be tough and sing strong. It was hard for me at first but I learned I can not always do what I want. In the future, I know I will be able to take on any acting challenge whether it is in my mind or that of another. I have learned that I can act!

What is your favorite comic book villain?

Samantha: I do not have a favorite comic book villain because I feel that no evil is right in any sort of way.

Who is your favorite comic book hero?

Samantha: My favorite comic book hero is Spiderman because he is interesting in so many ways. He can always come up with a joke in the worst of times. Just like Annie he is optimistic.

What has been your favorite experience so far?

Samantha: My favorite experience is acting along side with Boyd Barrett again. My first musical, EVER, was with him. It was Fiddler on the Roof. He was Tevye the father. I was Bielke the youngest daughter. I had a small part while he had the lead role. EVER since then I have looked up to him. That is why I am excited about being “Together at Last” along side him in a Lead role.

Samantha: Acting helps me get my stress out. It is a way for me to allow myself to be happy. I like both acting and musicals because they allow me to be comfortable. I like both, but if I had to choose one I would chose musicals because it gives me an opportunity to sing and dance, too.

What experience do you have performing?

Samantha: I have been in several plays produced by KAPS and directed by Lynette Zuber. I have performed in several musicals produced by Roswell Community Little Theatre, “Fiddler on the Roof” and “The Wizard of Oz” both directed by Edie Stevens and WayWayOffBroadway, “Joseph and The Amazing Technicolor Dreamcoat” and “Suessical the Musical” directed by Summer Souza. I have been in a short sci-fi film directed by Robert Mendoza, called “Elsie”. I won a best actress award for this film because my director made it fun and easy even though it was a lot of hard work. I had so much fun voicing Eleven in Boyd Barrett’s audio drama called “Roswell B.C.” Which stands for Before the Crash. I have been in two dance recitals with direction from The Studio Plus. I have performed in several vocal recitals. My last was my favorite. With the guidance of my vocal coach Devon Bullock I got to sing Don’t Rain on my Parade which my family posted on Facebook. Recently I was able to give back by acting in a commercial for RCLT to help raise funds for building repairs. This is very near and dear to my heart so please donate. Someday I hope to work along side my new mentors Jenci Huebner and Meryl McNally.

What is your favorite version of Annie?

Samantha: I do not have a favorite but I like that a young girl can be a hero. You can overcome adversity with faith, hope and justice. However, I do like that I resemble the pony tail, blue jean Annie, who rises up to fight against things that are wrong in the world. I just want to say thank you to Louise Montague for believing in me, Zach Anderson for encouraging me and everyone who prayed for me.